Try to beat this for world class sailing!

The 2016 edition of the Loro Piana Caribbean Superyacht Regatta and Rendezvous concluded on Saturday 12th March in the BVI with prizes awarded to the top yachts in each of the four competing divisions. Three days of racing accompanied by stronger than expected winds and set against the stunning backdrop of the British Virgin Islands made for an unforgettable event for participants and spectators alike. The 21 participating superyachts together with the motor yacht fleet taking part in the Westport Rendezvous enjoyed a packed schedule both on and off the water coordinated by organizers the Yacht Club Costa Smeralda on Virgin Gorda and Boat International. 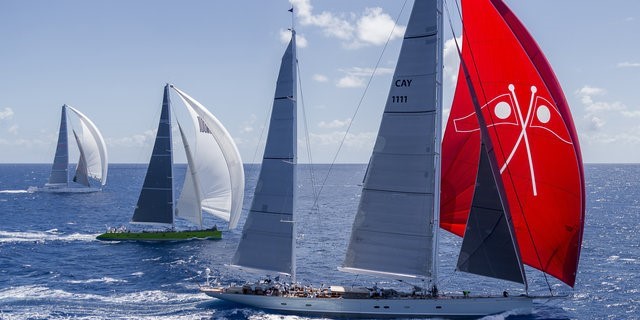 Tactical duels and neck-and-neck finishes characterised racing across all divisions while consistent winds of 18-24 knots put owners and crews to the test over the  three race days. In Class A the 34-metre Nilaya and the 33-metre Inoui battled for victory from day one with each posting a bullet in the first two races and heading into the final day on equal points. Overall victory went to Belgian boat Nilaya after she clinched the win in the final race of the event to beat the Vitters-built Inoui by just one point.

Nilaya’s tactician Bouwe Bekking commented on the event: “It’s a fantastic spot to race. There are so many opportunities as regards courses and it’s great for the guests as well because the scenery is beautiful as well as the racing being great. It was a little bit windier than we expected for this time of year but that made it interesting and it was a superb event.”

Class B saw a different winner on each of the race days and just two points separated the top four boats in the final classification. The 2015-launched Unfurled took a convincing victory in Race 1 but an equipment failure in Race 2 prevented her from finishing the course while the 60-metre Hetairos took the win. The third and final race saw yet another boat triumph as the 38-metre Perini Navi yacht P2 crossed the line ahead of Unfurled to take the overall win in the class.

It was another Perini, the 59-metre ketch Seahawk, that took the early lead in Class C and consolidated her position with a second bullet in Race 2 ahead of the 50-metre sloop Ohana. A hard-fought battle in the final race saw the Dubois-designed Bella Ragazza nip across the line just 5 seconds ahead of Seahawk, bringing her to second place overall with Seahawk and Ohana in first and third place respectively.

Things were more clear-cut in Class D where Donald MacPherson’s Swan 90 Freya dominated from the outset, posting consecutive bullets in each of the three races. Second place went to the Oyster yacht Maegan and the Southern Wind yacht Blues came in third.

As is customary at Loro Piana Regattas, superyacht owners and their guests enjoyed a scintillating social programme which commenced with a Welcome Cocktail on the YCCS Clubhouse Lawn on Virgin Gorda. Owners and their guests were then invited to an exclusive dinner hosted by Loro Piana with entertainment from virtuoso British pianist Oliver Poole, while crew relaxed at a beach party across the North Sound at Bitter End. Oil Nut Bay resort hosted a fabulous Fire and Ice Beach Party the following evening and festivities concluded with farewell drinks after the final prize giving at YCCS Virgin Gorda.

The Westport yachts participating in the Rendezvous also had a busy schedule which took in some of the sail racing, a cruise in company, a line-up in the North Sound for photographers, a lunch at Scrub Island Resort and Spa and a scavenger hunt on the final day as well as participation in all of the evening events in the regatta programme.

If you would like to participate in this exciting and amazing event next year or just be there to soak up the atmosphere and ambience, call BVI Holidays and we will be happy to arrange this for you.