in the British Virgin Islands

Fishing in the British Virgin Islands is some of the best you will encounter anywhere.  The first thing you have to do though is to purchase a fishing permit and you can apply here Conservation and Fisheries Department.

It doesn’t matter what your experience level is or what sort of fishing you want to do, the BVI has it all, including winning world records for game fishing. The BVI is a fisherman’s dream come true.

Weather and sea conditions permitting, offshore fishing in the BVI is bigger and better than almost anywhere else because of the distinguished list of trophy fish that inhabit those deep Caribbean waters.

COMMON OFFSHORE FISH TO CATCH AND WHERE THEY ARE USUALLY SPOTTED:

Weighing up to ten pounds, the slender, silvery and surprisingly elusive bonefish makes an incredible fighting fish. Excellent bonefishing can be found in the BVI, especially on the reef-ringed island of Anegada. The fishing community on this isolated island is reminiscent of Hemingway’s Bimini in the 1930s.” See BVI on the Fly”.

Other BVI locations also excellent for Bonefishing are the flats around Tortola, Beef Island, Camanoe Islands and Jost van Dyke. The North Sound has locations such as Colquhoun Reef and Eustatia Reef just off Virgin Gorda.

Saltwater fly fishing is popular for permit and tarpon also. Increasingly popular is fly fishing from sea kayaks. The run to the flats is usually made in a 28′ Bertram which is fully equipped with safety gear, coolers and fly fishing equipment. You will then transfer to an 18′ Bradley poling boat which accommodates two people plus guide.

Wading trips are also popular where clients are met and taken to the flats in a 4 x 4 vehicle. The fishing is equally as good and the wading trips are much cheaper than the boat trips.

the North Drop area, just north of Anegada and Horseshoe Reef, goes from 30 fathoms to over 200 (1200 feet). Huge schools like squid and flying fish congregate into dense “clouds” in and above the numerous canyons in this area to feed on the upwelling currents and, in turn, become baitfish for the ocean roaming predators, such as yellowfin and blackfin tuna, wahoo, dolphin or dorado and the most popular gamefish in the world – the blue marlin.

It is a well known fact that the waters known by the names “World Famous North Drop” and the “Puerto Rican Trench” are some of the best sport fishing grounds in the world. The North Drop contains the second deepest ocean depth on the planet at 33,000 feet deep. In fact, all sport fishermen agree that from June to October, these waters are the ‘Capital’ fishing grounds for the monster Atlantic Blue Marlin. Jost van Dyke is the closest island to the “Corner”, where record after record has been set. Fish for Blue and White Marlin, Longbilled Spearfish, Sailfish, Mahi Mahi, Wahoo, Kingfish, Shark, Blackfin Tuna, Skipjack Tuna, Little Tunny, Bonito and monster Yellowfin Tuna. Experience the local art of night bottom fishing and deep water Grouper and Snapper fishing, where you could hook up with Swordfish, Thresher and Mako Sharks.

Fishing charters pick up from many convenient points throughout the BVI.

Believe it or not, the British Virgin Islands even offer some decent onshore fishing. It’s actually possible to reel in photo-worthy kingfish, triggerfish, or yellowtail snapper after you drop a line.

Please note: There are three different kinds of triggerfish so you need to be able to tell them apart. Rule of thumb:

Trolling a line behind your yacht can prove to be very worthwhile. Even at slow sailing speeds between 2 and 3 knots, trolling can still snag you decent catches of mackerel, jacks, barracuda, and yellowtail snapper. Troll your way towards Anegada at about 5-7 knots and you could score Wahoo and Mahi Mahi.

There is a great fishing spot just off the west side of the Queen Elizabeth Bridge that connects Beef Island to Tortola. It’s easy to access and you can drag your line in the fairly strong current.  This could catch some surface feeders like mackerel, kingfish or tuna.

The fishing in the BVI is varied, interesting and you can fish in so many different locations.

Speak to our specialists, they're ready to discuss and help create your dream experience! 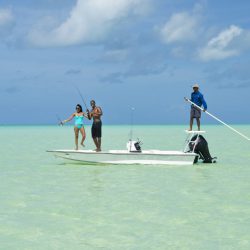 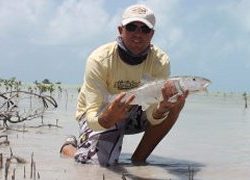 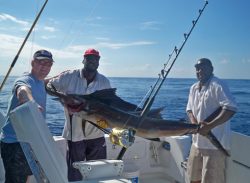 What our clients say...

I just want to thank you for making our time in the BVI so special.

All the arrangements you made for us worked out just beautifully ... The Cliffs ... the ferry schedule... right down to the taxi driver who met us in Spanish Town on Virgin Gorda. Thank you so much for planning out every detail for us. ...

I don't know where to begin to thank you for all the guidance and directions you have given me on this memorable and unforgettable birthday holid...

The BVI even more spectacular than we remembered!

We are back and you won’t be surprised to hear we had a fantastic time! Despite all the hassles with testing it was well worth it and the whole trip was amazing. ...